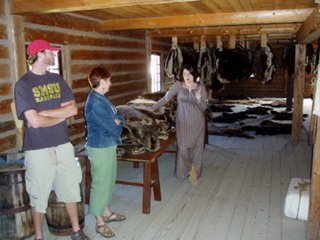 Ft. William is really cool and definitely worth your time if you ever get to Thunder Bay. Ft. Williams was not a military fort, but a fur trading post of the Northwest Fur Trading Company, a direct competitor to the Hudson Bay company. The fur trading business was at its zenith around 1815. Basically, the fur trade supported the fashion industry of Europe. Voyaguers were the (more or less) indentured servants of the company, and were, socially, about as low as you could go. They worked incredibly hard moving furs to market for nearly nothing. Women during this time were little more than slaves. Life was harsh. I cannot begin to repeat the data dump we recieved in the two hours we spent at the fort, but I can tell you we could have easily spent a couple of days there. The staff members who make the presentation, made up chiefly of students, are all playing the parts of real characters that they have researched and who actually lived in the area. When they speak to you, they keep in character. For instance, when we told our guide that Nate played baseball, she said she was unfamiliar with that game but she did know lacrosse. Very, very interesting. I suggest you take your families to Ft. William should you ever get to Thunder Bay. 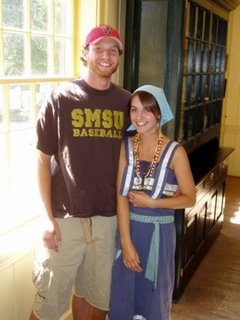 Now the guide you see in the picture above was trying to recruit us to join the Northwest Trading Company. She was trying to point out the benefits to us, although they weren’t too great. One of the features she was trying to sell was that one of the prominent members of the company, the apothocary (who was also the surgeon) had an elderly daughter who needed to be married off to someone. This woman had reached the age of 16 and was not yet married–quite a problem in those days. Soooo, our guide identified Nate as an eligible male who could possibly marry this women, if he didn’t mind her being so old. It turned out that this woman wandered into our tour, and she and Nate were immediately matched. Our guide asked if they could be married immediately, but the post head administrator informed us that being betrothed was enough, and that the marriage, in the Scottish sense, was not considered consumated until the first child was born. They more or less lived in common law marriages in those days. So anyway, when the eligible maiden came into the great hall, I took the opportunity to take a picture of Nate and his betrothed. It was kind of fun.

A young girl sitting with our crowd in the ballpark works at Ft. William. She says that working there is a really great job. She said that one of her friends put it this way: “Just think! We get paid to play dress-up every day.”