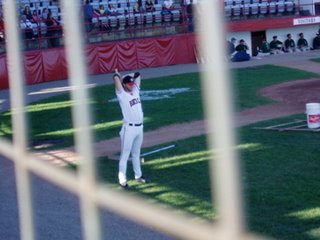 Nate during pre-game warmups. He spends a lot of time stretching. 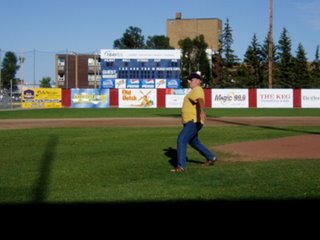 OH! Believe it or not, the assistant General Manager came to ask me to throw out the first pitch of the game. I was flabbergasted! Really! I agreed. Then I had to warm up with Nate. My arm went sore almost immediately. So when the time came, I walked out onto the field (notice that I did not take the mound, but stood in front of it). And, to top it off, instead of the catcher catching my pitch, Nate was behind the plate. Talk about an emotional moment. I have the souvenir ball. It never hit the ground. As Nate put it, I threw a perfect strike! :-) That was really a kick. 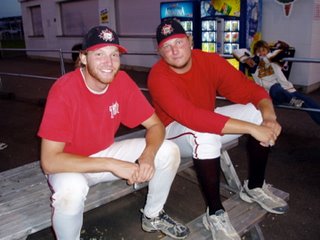 Nate and his Southwest MN State U teammate, John Goneau, a pitcher. This is after the game when the players come into the stands to sign autographs. 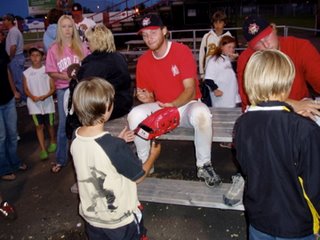 One of the things I had forgotten is how important and awesome it is for little kids to be around ball players. The players are kids themselves, but not in the eyes of these youngsters. They are huge heros. It’s so much fun to see. Here Nate signs one of the kids gloves. 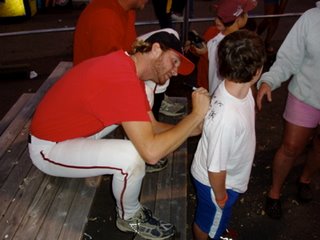 Kids came for about a half hour. The players are very patient. Here Nate signs one of the youngster’s T-shirts. 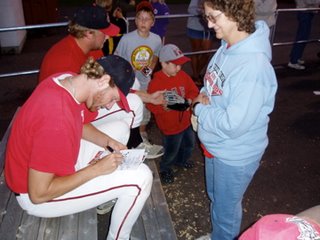