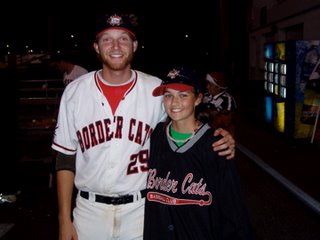 The Border Cats won tonight, 3-2 in 10 innings. Nate got the hit that scored the first run, then he scored. Game was tied at 2 after 9 innings, but the Border Cats managed to score in the bottom of the 10th to win. Kind of exciting. During the game, Nate got upset with himself, and broke a bat over his leg. Then when he took the field in the next inning, he decided that wasn’t such a smart move because his leg was really sore. :-) Kids!

Anyway, after the game, he came over to ask me if I would take a picture of him and the “Bat Girl.” Melanie is one of the kids who works with the team. Although Nate has only been there for two weeks, it was quite obvious that she had developed a sweet spot for him. Of course, Nate has always been good with kids. I hope all of you can someday feel the pride (if you haven’t already) in your kids that I feel in Nate.